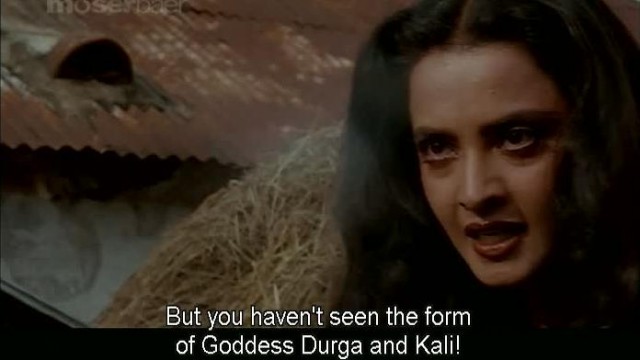 Can Blue Gods Sing the Whites?

Howdy! I’m doing a session at the Nine Worlds Geekfest 2013 on Friday, the 9th of August.

Or, here’s a flier if you like Rekha’s gaze of impending and total destruction (who doesn’t?)

The 75 mins long session will be a heady mix of trailers and sequences tracing Desi cult film madness from the ’30s onwards , bits of me talking and a Q&A session. Ace swashbuckler, Tim Concannon, will be doing his own session earlier that evening and if you don’t mind, recording this for a Resonance 104.4 FM show/ podcast.

More on the session:

Karma punks assemble! One hundred years of Indian cinema has given the world much more than Bollywood musicals and art films. Hindi films belong to India and to the world. Shruti Narayaswamy started out as a bio-technologist. After a detour into corporate marketing she has escaped the Matrix and is on a mission to lead the cheer for the fantasy cinema of India, in all its ultrabrown polysexual complexity.

The Hindu pantheon alone has 330 million gods, it’s impossible for India to only make a few kinds of films. However, the challenges of film preservation and curation are mind-blowing in a country where the law of the land places cinema on the same level as vices like gambling and smoking.

(I intend on getting off my tashreef and doing a proper blog post on the National Film Archive of India eventually but meanwhile, here is my short piece I wrote for the monthly periodical,The Arts. I also highly recommend Shivendra Singh Dungarpur’s excellent documentary, Celluloid Man)

The Indian subcontinent has produced and inspired strange horror films like the Ramsay brothers’ Veerana – featuring an Indian Dracula and Hindi-speaking werewolves – gothic supernatural masterpiece Mahal, frenetic slapstick action comedies, like the super hero/spy classic Mr India. Spaghetti-western homage. Sholay is more than a film: in India it’s a national institution, akin to the Wizard of Oz or Star Wars.

Khoon Bhari Maang is a garish Eighties’ exploitation revenge drama, full of power dressing incarnations of the goddess Kali hellbent on revenge against evil men. Hari Rama Hari Krishna is a psychedelic trip into the mind of the decadent West.

South Asian culture has also inspired new and revolutionary work in the last few years: Nina Paley’s Sita Sings the Blues is an animated love letter to India based on the Ramayana and set to the ragtime jazz songs of Annette Hanshaw. In its conception on a scale with Yellow Submarine, Sita Sings the Blues was crowd-funded, made entirely on a laptop and is available for free on Nina Paley’s website. East is meeting West online, with unpredictable and startling results.

So, welcome and swagatam.

There won’t be Aishwarya Rai but there will be Fearless Nadia, and I know who I will be betting on in a sword fight.