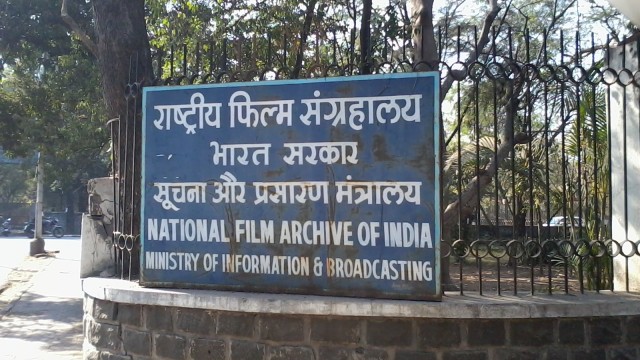 No Country for Old Cinema?

Originally published in the July issue of The Arts. Reblogged with permission.

The end credits of the 1948 magnum opus Kalpana(“Imagination”) roll in the screening room at the National Film Archive of India. The audience is small, perhaps of 20, emerges looking slightly in awe of what they have just witnessed and proceed to collect their footwear. It seems oddly appropriate that they have been asked to enter the screening room barefoot, just as one would be asked to be at any place of worship in India. If Cinema is a religion, coming to the National Film Archive is pilgrimage.

Kalpana, directed by Uday Shankar, was released originally in 1948, a year after India’s independence. The story of modernity and the freedom of expression told through dance couldn’t have come at a better time for a country taking its first free steps towards becoming a republic.

Sadly, it wasn’t preserved for posterity but lay in a warehouse inside rusty film cans in Mumbai until it was discovered by accident in 2010. The original silver nitrate film and the dupe negatives were restored by Martin Scorsese’s World Cinema Foundation in 2012 after much bureaucratic haggling with the Indian government. Now, anyone can access the film online here.

Unfortunately, other films from India’s diverse cinematic past have been lost forever. The only copy of Alam Ara (1931, “The Ornament of the World”), India’s first talkie is speculated to have been sold by the producer’s son for silver.

Of the 17,000 odd Indian films made in the silent era alone, only 12 remain. Several of these were made in as many as 100 Indian languages: a lost testimony to the ingenuity and the success of a cinema industry that began in 1913.

While his contemporaries George Albert Smith and the Lumieré Brothers innovated on the other side of the globe, Indian film pioneer Dadasaheb Phalke taught himself the craft of filmmaking in London and Berlin. Here’s some original footage from Raja Harishchandra

The humble beginnings of Indian Cinema. A still from Harishchandrachi Factory (2009)

The original copy of Raja Harishchandra now resides at the archive with 18,000 other invaluable Indian and foreign films, 18,000 original posters, 27,000 film journals going back 8 decades and 190 “oral history” audiotapes of auteurs such as Satyajit Ray and Mrinal Sen.

India is now the biggest producer of films in the world with a hugely successful mainstream Hindi film industry or “Bollywood” but regional language films, film research and restoration activities remain severely underfunded.  Even at the archive, the Chief Restoration Officer reluctantly tells me that original colour prints dating back to the 1950s that need to be maintained at -10 °C are stored at 2°C.

There isn’t a generator back up for power failures, which are frequent in the summer and temperatures in Pune can reach up to 40 °C. A fire in 2001, suspected as a result of improper storage conditions destroyed hundreds of prints from the ’50s, regarded as some of the most glorious Indian films of the era. The National Film Archive remains a sleepy, sepia-tinted idyll surrounded by dusty Gulmohar trees as the bustling metropolis grows around it. Lack of digital infrastructure and basic cataloguing deters researchers.

Cinema is largely perceived to be frivolous in the country due to lack of funding for film studies and the dissemination of film culture. The phrase “escapist musicals” is frequently used to refer to Indian cinema, even as feminist films such as Devi (1960, “The Goddess”) and neorealist masterpieces like Amma Ariyan (1986, “Letter for Mother”) languish unsung in the archive. While no one kind of cinema is more “important” than the others, some remain more at the risk of extinction than others.

As India tries to assert itself in the world, some of the most important chapters from her cultural narrative gather dust and atrophy as I type. If the National Film Archive isn’t resuscitated, the loss to not just India but the world’s heritage will be incalculable.

For more information about the National Film Archive of India, here’s the website.