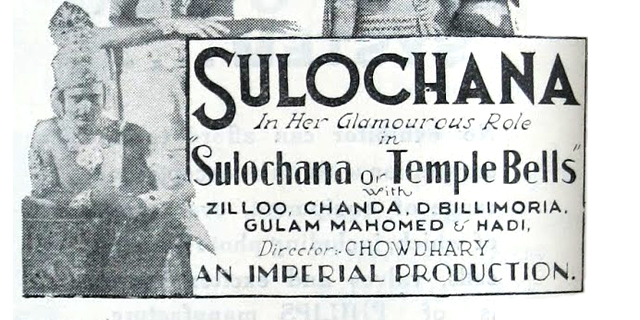 Before K Asif’s much loved costume spectacular ‘Mughal-E-Azam (1960) came ‘Anarkali’, the story of an ill-fated romance between a prince and a dancing girl. Anarkali was played by the legendary Sulochana.

The year before, in 1927, Sulochana – appearing by her original name, Ruby Myers – gave evidence to the Indian Cinematograph Committee, which reported to the British Governor-General of India.

The following is from ‘Indian Cinematograph (Rangachariar) Committee 1927-28: Evidence Vol 1: Bombay and Karachi. Calcutta, 1928‘ ‘Oral Evidence of Witnesses Examined at Bombay and Karachi with their written statements’ held at the British Library, Asia, Pacific and Africa Collections in the National Archive at Kew. (It’s not online yet).

Chairman: Miss Myers, you have not favoured us with any written statement.
Ruby Myers: No.

C: How long have you been in the profession?
R: Two years.

C: And had you any training before you entered the profession?
R: No, I had no training.

C: What were you doing before you entered the profession – if you don’t my putting the question?
R: I was in the telephone office.

C: Do you think it will be an advantage if we had some institution where training could be given to actors and actresses?
R: I think it would be a very good thing.

C: Do you think there are many girls in Bombay who would be willing to come forward? You are fairly familiar with Bombay?
R: Very familiar.

C: You come in contact with quite a number of girls of respectable Indian families?
R: Yes.

C: Do you consider that, if a training class were opened, respectable girls and boys belonging to respectable families would join the profession?
R: Well, they would, if the cinema industry would rise.

C: I suppose the cinema industry in the country is becoming more and more popular?
R: Yes.

C: Not only the foreign films but also the Indian films?
R: Yes.

C: And I understand from witnesses who have come before us that the Indian films are getting more and more popular with the Indian public?
R: Quite so.

C: And what do you think should be done to make it more attractive?
R: Well, I think if we were financed properly – (the remainder of Miss Myers’ evidence was taken in camera).

In the eventual report, under a section headed ‘Criticisms of the Indian Censorship in India and England’ it’s remarked that:

Film censorship in India has been the subject of a certain amount of discussion both in India and in England for several years. In 1921 Mr. W. Evans, a cinema expert, brought out by the Government of India to make a survey of the cinema industry in this country, stated in his report that the existing Boards of Censors were “weak and inexperienced ” and suggested that the Government of India should urge the Provincial Governments to “stiffen up, and raise to reasonable efficiency, the present censorship, which is largely nominal. ” The Advisory Publicity Committee who considered Mr. Evans’ report recommended “that the local Governments should be asked to stiffen up their control in censoring films for exhibition in India.”

And, before that, under ‘General Effect’:

The general effect of the cinema upon the people must vary in different countries according to the class of films generally shown and the conditions of the country. We are concerned with the effect on the people of India. In India the problem is one of peculiar complexity owing mainly to the fact that the majority of the films exhibited are produced in the West and portray an entirely alien civilisation. There is the danger of Westernisation, of denationalisation, the ancient problem of new wine in old bottles. In the forefront of our report, however, we desire to place on record our unanimous conviction that the general effect of the Western films in India is not evil, but, on, the whole, is good. India is essentially a conservative country, possibly an ultra-conservative country. We are satisfied that the Western films, in spite of their defects, have an educational value for the people of India. They tend to open the eyes of the uneducated to other and more advanced conditions of life and to give them some idea, however imperfect, of conditions in other countries; they tend to broaden their minds and widen their outlook.

The report is mindful of press statements to the effect that:

owing to difference of customs and outlook, Western films are misunderstood and tend to discredit Western civilisation in the eyes of the masses in India. Such criticism was chiefly directed against “cheap American films.” To give an example of this sort of criticism, a well-known Bishop intimately acquainted with India stated (as reported in the Press) in a speech at a conference in England in 1925:

“The majority of the films, which are chiefly from America, are of sensational and daring murders, crimes, and divorces, and, on the whole, degrade the white women in the eyes of the Indians.”

The National Council of Women in Burma had noted in 1927 (the report relates):

“It is desirable and necessary to ban the numerous pictures in which sex is treated with vulgarity and the physical side of it over-emphasised.” They refer also to “crime” films, the effect of the cinema on children, and other matters.

The report notes that in 1925, the Indian Council of State debated these questions:

In the course of his opening speech [Sir Ebrahim Haroon Jaffer] stated: “I have come to the conclusion that some such action as is suggested in this resolution should be taken in view of the altogether erroneous impression made on the Indian mind of the social life of England, America and other Western lands by many of the cinema films permitted to be shown throughout India, an impression which is decidedly inimical to the interests of the country in general.” Again he said: “A picture which would be perfectly harmless in Europe where all the circumstances would be understood and all the humour or sarcasm immediately recognised, might be of great harm in India.” He referred also to the importation of undesirable films, saying: “It would almost appear that certain of the American producers cater especially for such countries as India and Japan and make films which they would never dare to release in America or England.” “I believe it is also true that any films which are so suggestive as to come under the ban of the Censorship Board of America are silently packed up to places like India, where, up to the present, the authorities have not been so strict in these matters.”

How lucky that the uneducated masses had the British Government of India to protect them from the corruption of their national identity and morals by undesirable colonial commoners. Presumably the Bishop who rallied against the popularity of “cheap American films” had in mind morally uplifting British fare from 1927, like Hitchcocks’s ‘Downhill‘ (about infidelity, and blackmail at a public school) starring Ivor Novello, or Ivor Novello (again) in ‘The Lodger: A Story of the London Fog‘ (a film about a serial killer, which was restored by BFI in 2012). Estelle Brody was also busy in 1927.

In the Mother Country, 1927 was also the year of the Cinematographic Films Act which aimed to counter the growing dominance of the world film market by American film-makers by recreating their vertically integrated system of production, distribution and exhibition. It had the reverse effect to stimulating Britain’s film industry, though: leading to a speculative boom and bust, and to the ‘quota quickie’ system which kept John Mills in work for decades to come, and gave directors like Michael Powell their first break. However, the main effect of the quota system was the dumping of cheap British films on British audiences as ‘B’ pictures to fill long bills in rained-in, Depression-era cinemas.

*‘Bhaneli Bhamini‘ was later remade as another missing film on the list of 21, ‘Griha Laxmi‘ ‘Educated Wife.’ It was released in the same year as S S Milard’s ‘Is Your Daughter Safe‘ aka ‘The Octopus’, which Variety called “possibly the strongest and most dangerous” film of its kind made in America at that point. In an advertisment in the Bombay Chronicle in 1927, ‘Bhaneli Bhamini’ was described as “an excellent warning to the younger generation to beware of venereal disease and take necessary precautions.”