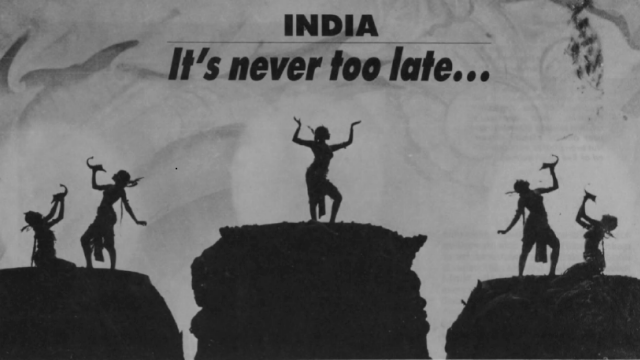 [Image caption: ‘Sairandhari’ (1933) by Rajaram Vanakudre Shantaram. was the first colour film made in India. This superproduction was an adaptation of the Mahabharata epic. Shantaram was one of the founders of the Prabhat Studios, based in Poona, and specialized in films on social and mythological themes. 2014 update: P K Nair says this still isn’t from ‘Sairandhari’ but is from Prabhat Studios’ 1932 ‘Maya Machhindra‘.]

A few years ago, a well-known Indian film pioneer told me that of the forty odd films he had made he considered that only two or three were worth preserving in the National Film Archive of India. This in a way reflects the attitude of most of our film-makers to archival preservation of their films.

The average film-maker in India does not believe that what he is doing is of any historical consequence, let alone of cultural interest. For him, as for his colleagues film-making is first and foremost a commercial proposition meant for mass consumption. His primary interest is to get his investment back with a reasonable profit within the shortest time span. Setting aside one of the fifty odd prints made for the initial release of a film would not cost him much compared with his total production costs, but his attitude would be: “Why should I leave a new print lying idle in the Archive vaults when it could be bringing in a good return on the screens of local cinemas?”

The multi-theatre simultaneous release craze means that the producer/distributor has to make several prints from the original picture and sound negative. He is not in the least concerned that every time a new print is made the useful life of the original negative is reduced. In the Indian film industry it is not customary to make internegatives or inter-positives. The “Colour Reverso Inter-negative” process is practically unknown and all release copies are printed from the original negatives. As a result, a large number of original negatives of highly successful films have been damaged beyond repair due to indiscriminate duplication of positive prints, both 35mm and 16mm.

In India the cinema has never been accorded high priority. To the intelligentsia and educationists the cinema was something to be looked down on with contempt and it was often bracketed with social evils such as betting, gambling, drinking and prostitution. But the masses developed a passion for the cinema, finding in it an instant escape medium in which to forget the drudgery of daily life. They patronized it so ardently that the Indian cinema has by now become the most prolific of all the national cinemas.

With a stupendous annual output of over 750 feature films, in fourteen major languages, which find their outlet through some ten thousand permanent cinema houses throughout the country, the cinema industry has become very much a part of the Indian reality. Audiences have lived with it, laughed with it, wept with it and virtually grown up with it. It has shaped their lives, their attitudes, values and consciousness.

Nevertheless, its importance has only recently been recognized. As a result, although India started making films at the turn of the century, at the same time as the rest of the world, nobody thought we should have a Film Archive to take care of our film heritage. Even after independence, it took us nearly seventeen years to start collecting films in an organized manner. By that time some sixty to seventy per cent of our preindependence output had vanished. Films of that period were not available for love or money. Their negatives had crumbled and turned to powder, or after extraction of the silver from the nitro-cellulose base, had been turned into bangles and ladies’ handbags. 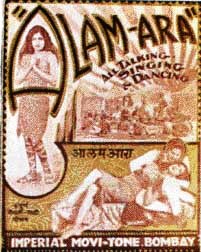 One such film was Alam Ara (1931, in Hindi), the first Indian talkie, which is still not traceable. When contacted two years before his death, Ardeshir M. Irani, the maker of this film and the man who brought sound to Indian cinema, told us that he had kept some reels of the film in his office at the Imperial Studio (now Jyothi Studio). But his son Shapoorji took us aside and confided: “The old man still thinks the reels are lying around in his office, but I know for certain that they have been disposed of as junk. I myself did it as they were creating a fire hazard”. What a pity! The man had no idea that he had allowed one of the most important historical records of the Indian cinema to be destroyed.

Among the most important landmark films of the Indian cinema that have thus vanished into oblivion are: 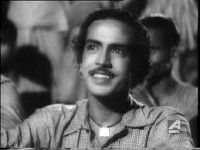 ‘Bhakta Vidur’ 1921, banned by the British censors in Karachi and Madras.

A folk tale in which the film director himself played the central role as a sensitive nationalist leader; he wears modern dress whilst all the other characters don suitable mythological garb. [2014 update: Dwarkadas Narandas Sampat produced and starred rather than directed]. 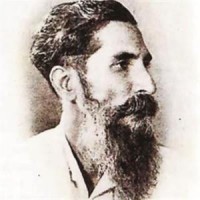 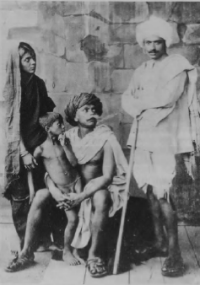 [Image caption: Saukari Pash (“The Indian Shylock”, 1925) was directed by Baburao Painter, who had founded the Marhastra Film Studios at Kolhapur in 1919. The Indian director R. V. Shantaram played a starring role in the film.]

A middle-class peasant family’s struggle against the exploitation of a heartless money-lender. 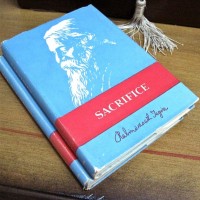 Based on Rabindranath Tagore’s ‘Bisarjan’. 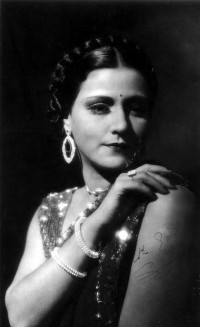 An ill-fated romance between Emperor Akbar’s son, Prince Salim, and a dancing girl, in which the title role was played by the beautiful Sochana (Ruby Meyers), the highest paid star of the Indian screen of those days.

The central character of this film was a Gandhi-like figure. 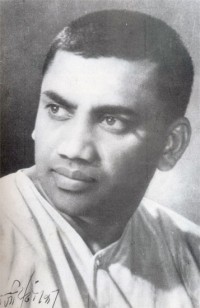 The first film in the Marathi language to have a successful silver jubilee run. 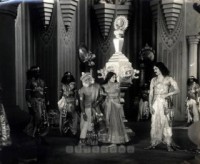 The first colour film made in the country (it was processed in Germany using one of the early colour processes introduced by Agfa). A costume spectacular from the Mahabharata.

Leela, one of the stars of ‘Sairandhari’ 1933. Photograph is in the Prabhat studio museum, FTII, Pune. 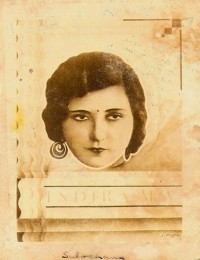 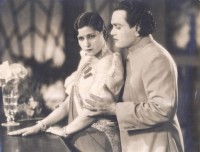 Based on Munshi Premchand’s powerful story about the rights of the working class. 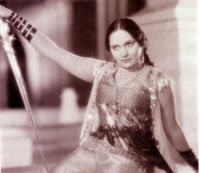 In this film gods and goddesses were portrayed for the first time as simple human beings without their haloes or heavenly charisma. 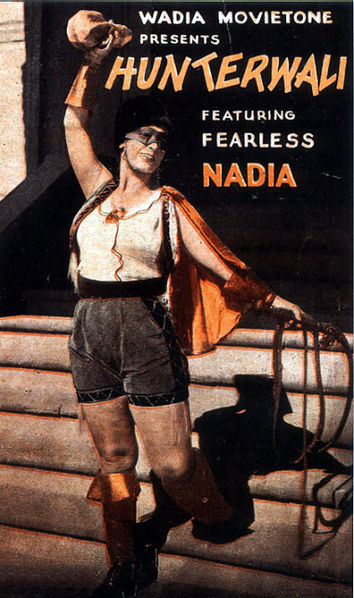 In this film Nadia, the fearless, brought a new image of the liberated woman, in keeping with the awakening national consciousness of the times.

An adaptation of Shakespeare’s Hamlet. 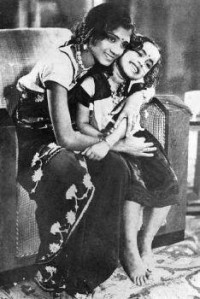 About the sufferings of a widow and her daughter in an orthodox Hindu society.

[Vinayak directed ‘Chaaya’] about man’s inhumanity to his fellow human beings, based on a story by V.S. Khandekar.

[2014 update: In the 1984 article, P. K. Nair is referring to a 1929 silent version of ‘Gopal Krishna’ directed by Rajaram Vankudre Shantaram. The 1938 Hindi and Marathi sound versions – both starring Shanta Apte – are available commercially on VHS from Prabhat studios, and there’s a digitally remastered version on DVD.]

No study of the Indian cinema would be complete without having access to these and many other films that are believed to have been permanently lost. However, “lost” films have turned up in the most unexpected places and the film archivist keeps on hoping that the film he is looking for will one day be found. He hopes for miracles; and miracles do sometimes happen.

The idea of establishing a national library of films was first broached in 1964, when the Government of India instituted the National Film Awards. But this was to be limited to award winning films only. The concept of an Archive as a repository of all national films of permanent historical value did not crystallize until some ten years later.

Why, it is often asked, should public money be spent on preserving all the junk in the way of cheap entertainment being made by unscrupulous speculators? The question becomes all the more pertinent in face of the glut of films produced in India in recent years. The archivist finds himself in the difficult position of having to decide what to keep and what to discard. Selection becomes unavoidable. But such doubts will persist as long as the cultural role of the cinema – even of escapist cinema – is not fully accepted. The task of the film archivist becomes less taxing once there is a national awareness of this important issue. Thereafter what is required is the good-will and co-operation of film-makers and wellwishers.

Cinema and television are the most important cultural forces developed by man in the twentieth century. The preservation of cinema culture is a moral responsibility, a duty we owe to future generations. We shall be failing in our duty if we do not take care of our film and television heritage.

PARAMESH KRISHNAN NAIR is director of the National Film Archive of India. He has taken part in a wide range of activities in India and internationally to promote the safeguard and protection of moving images and contributed, as a specialist, to the drafting of the Unesco Recommendation. He has published a number of studies and articles on aspects of cinema.

P.K. Nair, archivist and the founder of the National Film Archive of India (NFAI)

Update 28th March 2014: Republished with annotations, by permission of the author Parmesh Krishnan Nair (P.K.Nair). Nair retired from the National Film Archive of India in 1991. He was the recipient of the Satyajit Ray Memorial Award in 2008 and the subject of a 2013 documentary ‘Celluloid Man‘ directed by Shivendra Singh Dungarpur (DVD available in the UK on Amazon). P.K. Nair now lives in Pune, India.