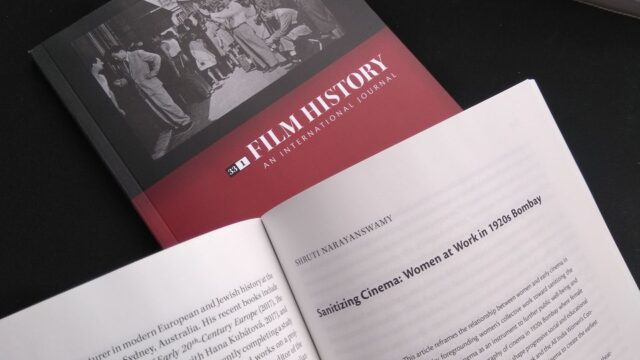 I’m in the latest issue of the journal Film History!

My article ‘Sanitizing Cinema: Women at work in 1920s Bombay‘ is based on the first chapter of my doctoral thesis, titled ‘Women’s Experiences of Bombay Cinema, 1920s-1940s’.

This article reframes the relationship between women and early cinema in Bombay in the 1920s by foregrounding women’s collective work toward sanitizing the cinematic medium and using cinema as an instrument to further public well-being and women’s rights. It argues for a historiography of cinema in 1920s Bombay where female cultural and political instigators used cinema to shape progressive social and educational policies. Through events such as the Bombay Baby Week and the All India Women’s Conference, influential women produced and employed useful cinema to create the earliest film exhibition spaces for women in late colonial Bombay.

In most instances, you will need an institutional subscription to access this article. If you’re unable to access but would like to read it, please email me on sn52@st-andrews.ac.uk and I can help you out 🙂